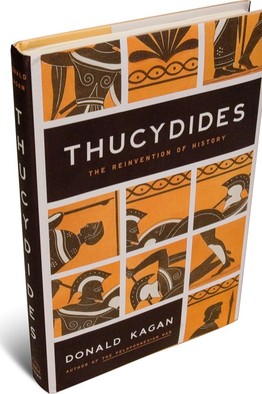 Thucydides: The Reinvention of History by Donald Kagan

Donald Kagan, who has been a professor of history and classics at Yale University almost as long as I have been alive has written a provocative book about Thucydides that challenges both conventional scholarly wisdom regarding the man who shares the title of “The Father of History” and the purpose of the book Thucydides meant to be “a possession forever”, The Peloponnesian War. In Kagan’s interpretation, Thucydides is the father of historical revisionism whose careful methodology furthered a political agenda: to defend the record of the Periclean state in Athens, where democracy was moderated by the wise statesmanship of the old aristocratic elite; and lay the blame for the downfall of Athens at Spartan hands on the vulgar hubris of radical democracy of mob and demagogue.

Thucydides is tightly focused argument about Thucydidean omissions, juxtapositions and treatment of sources and bias in his analytical rendering of military events and debates in the Assembly, not a comprehensive examination of  The Peloponnesian War. Specifically, the treatment of Pericles and Nicias (whom Kagan argues Thucydides favors and whom Kagan blames for failures of strategy and execution, especially the latter) vs. that he meted out to Cleon, Alcibiades and Demosthenes. Kagan criticizes Thucydides for the deliberate omission of speeches of Periclean opponents in debates where he  had been present and purporting to know the thoughts of actors where definitely had been absent, in exile; of faulty military analysis of the situation of the Spartan garrison besieged on Sphacteria due to personal enmity with Cleon and of the original expedition to Syracuse, because of favortism toward Nicias.

On Nicias in particular, a fellow aristocrat in favor of strategic restraint whom Kagan ascribes blame for the disaster in Sicily, did Thucydides seek a radical revision of the contemporary Athenian opinion. It was Thucydides belief that the post-Periclean democracy was a reckless, superstitious and greedy mob that led him, Kagan argues, to craft his narrative as an apologia for the inept statesmanship and incompetent generalship of Nicias that brought Athens to utter ruin in Sicily. Kagan’s accusations of bias on Thucydides part are more persuasive than his contention that the original expedition to Syracuse of sixty ships was a justifiable and sensible endeavor.

Kagan’s charges against Thucydides indirectly raise the larger question of politics in postwar Athens. A democracy shorn of it’s empire, long walls and fleet, defeated in external war but triumphant in brutal civil strife over it’s internal oligarchic enemies, was in all likelihood a dangerous place. Xenophon felt as a follower of Socrates, who had been associated with the reviled Alcibiades and Critias, that it was politic to leave Athens for his march upcountry under the banner of Cyrus. Socrates was unjustly put to death by the democratic faction. Writing from retirement in the luxury of a distant estate was a wiser option for a man of Thucydides’ opinions in that era than a return to the political fray in Athens and in part, would explain his supposed “revisionism”.

Switch to our mobile site